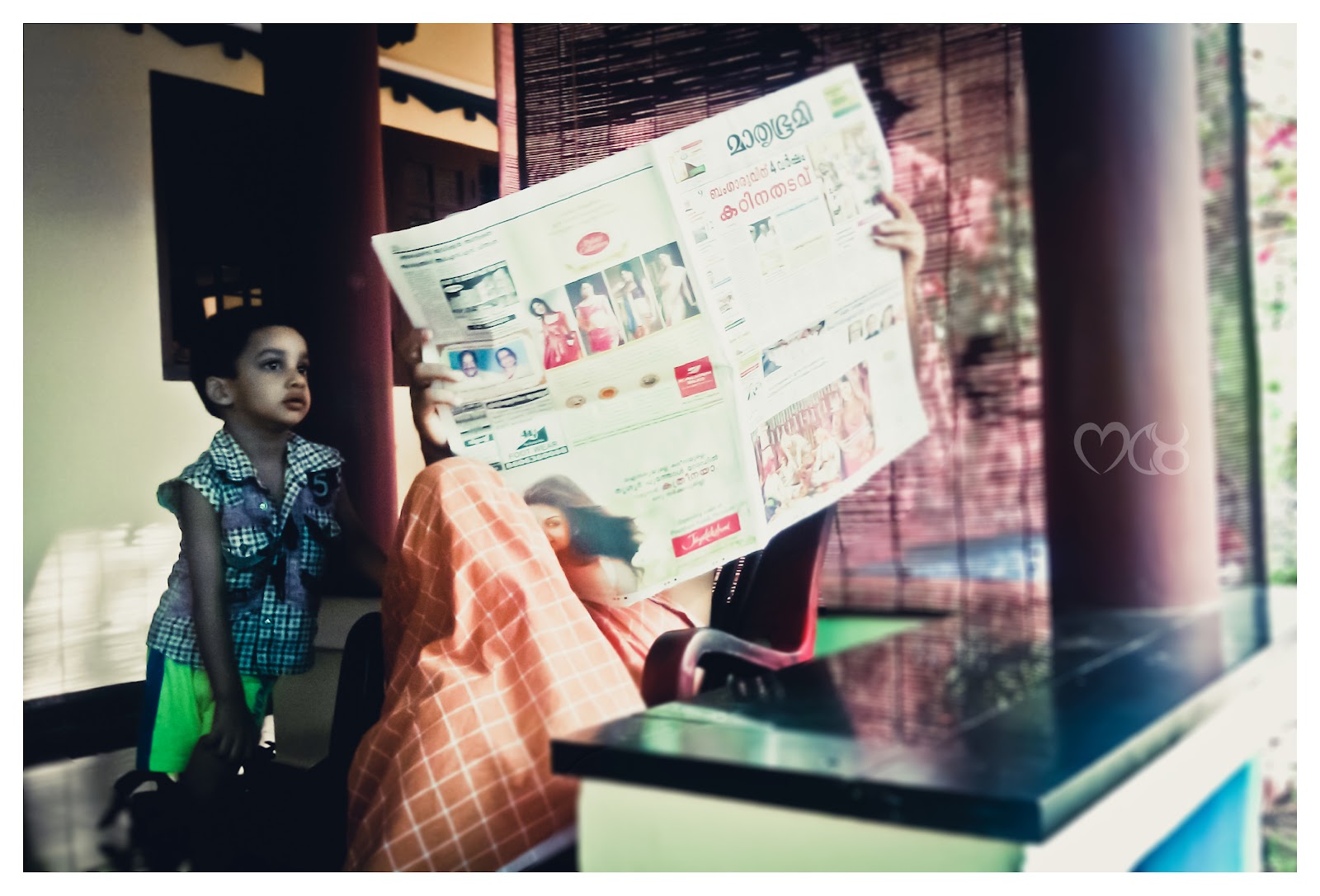 My Cousin and his 4 year old son are busy reading the Newspaper on a cool sunday morning.

Posted by Ranjith Jayadevan at 12:16 AM No comments:
Email ThisBlogThis!Share to TwitterShare to FacebookShare to Pinterest
Labels: Frozentime, Mobile-HTC Salsa, News Reader, People

'WHAT??? Are you sure that’s the name of the hotel', I asked again to make sure that I heard the name correctly.
'Yes' the voice from the other end of the telephone line said with an unnerving tone of certainty.
The year was 2009 and It was the beginning of the monsoon season in Kerala. I had just completed 38 days in SIB when I got the call from HO with an instruction to proceed to branch Aruppukottai. I had to check Google maps twice to locate the place and it took me another 2 hours to select the best way to reach the place on June 2nd. In case you are wondering where this place is, lemme help you with that. Aruppukottai  is a village located some 60 KMs south of Madurai on the banks of NH 38 taking which one can reach the southern port city of Tuticorin. Though it is a small village, Aruppukottai can be termed as an Industrial town when compared to any city in Kerala. Major business house is the Jayavilas Group and they practically own the whole village including five textile mills.
Since I would be spending almost a week there, I had to arrange for lodging and since it can’t be done 'online' (no surprises there) I called the branch which I was supposed to inspect and asked them to book a hotel room. I was at the Guruvayoor KSRTC Bus Stand waiting for the bus that goes to Madurai when phone rang. It was the branch and the voice introduced himself as Mr B. He told that a room has been booked at 'Karadi Maligai' Lodge.

'WHAT??? Are you sure that’s the name of the hotel', I asked again to make sure that I heard the name correctly.
'Yes' the voice from the other end of the telephone line said with an unnerving tone of certainty.

Apparently 'Karadi Maligai' is one of the best hotels in the region that caters mainly to visiting business men and bank officials. But somehow I found it difficult to swallow and my mind resembled the evening sky that had become pretty dark with rain clouds confirming the arrival of Monsoon. There is nothing to say about the bus ride. You have to travel in one of the 'Super Deluxe' bus that SETC runs to understand how 'great' the service is. However, the major shock was not the bus ride. It was the end of the bus ride. It reached Madurai by 3.30 in the morning of June 2nd and I didn’t know from where I can get a bus to Aruppukottai (the bus stand is huge). But thankfully one fellow passenger was kind enough to help me with the directions and I discovered the platform for Aruppukottai buses. Since it was the day of reopening of schools after summer vacations, the bus was already packed by angry fathers, loud mothers, crying children and people with school supplies. I didn’t get a seat. After some 15 minutes a blast of sound waves woke me up from my half sleep. The bus had begun its south bound journey and the driver had promptly switched on the DVD player which was now playing heavy duty 'dappamkuthu' (if you don’t know what’s that, it’s like hard metal rock in which the guitar is replaced by traditional drums and the lyrics is in Tamil) songs. It couldn’t get any worse, I thought: Another mistake.
It was 6 AM by the time the bus reached the Aruppukottai bus stand. As instructed by the voice on the phone, I got down in front of the old bus stand and took an auto to Karadi Maligai. The voice told me that just the name would be sufficient as it’s a famous landmark of the town. On my way I could see the Gopuram of an ancient temple and the music of MS Subbalakshmi was already in the air. It had a soothing effect. But that lasted only till I entered the famous 'Karadi Maligai' Lodge…
(contd)
Posted by Ranjith Jayadevan at 6:42 AM 1 comment:
Email ThisBlogThis!Share to TwitterShare to FacebookShare to Pinterest
Labels: Chronicles, Pencilmarks 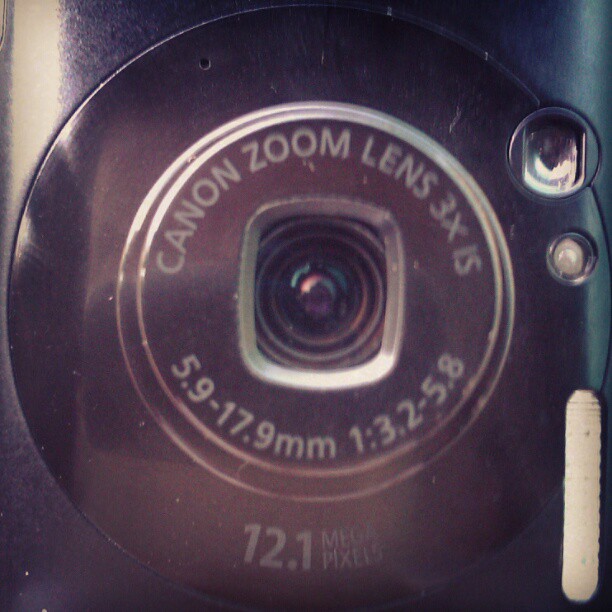 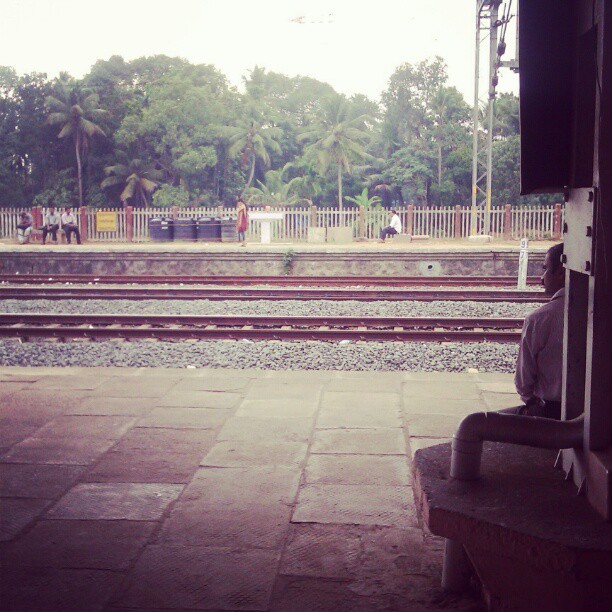 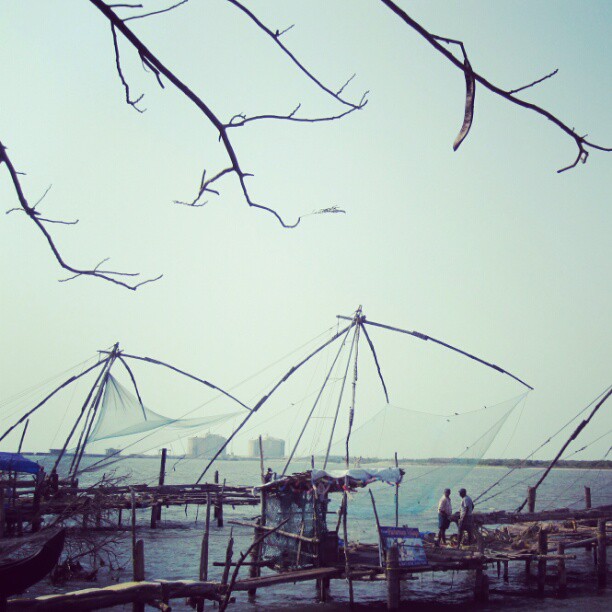 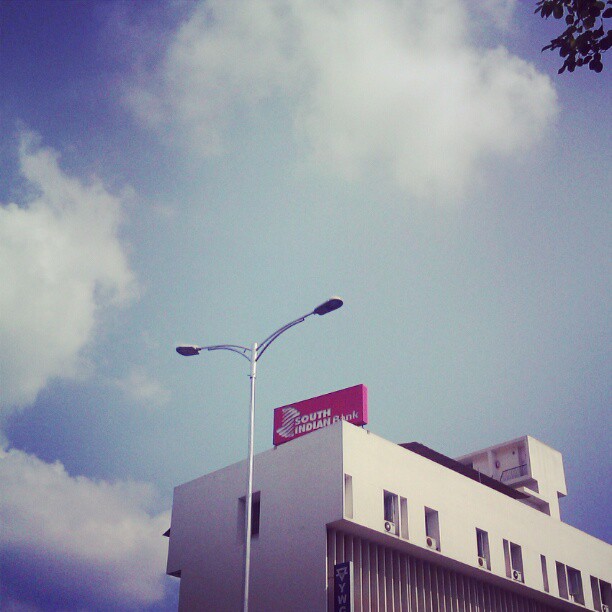